Today was bingo - we visit a couple of wild polar bears, still a little sleepy but at least a little animated! Picture of a relaxed polar bear on the rocks
in Churchill, Manitoba, Canada.

October 24, 2007:
It seems to be our new thing - early up and early to bed (relatively early to bed anyway)! Our fellow room mates all leave early for their respective tours, so breakfast is served rather early - although we are still the last to eat! It actually seems to be a good way to do things here since the days are getting shorter.

This morning it started out pretty much the same as yesterday with a delicious breakfast, a little computer work, then heading out into polar bear country. We are renting our own vehicle so that we're free to come and go whenever and where-ever we like depending on the weather and how much work we need to catch up on at our base. It's definitely a great way to tour Churchill and the tundra, minus the benefit of commentary and information provided by a tour guide on a regular polar bear buggy tour.

The Churchill area is one of the best places in the world to see polar bears because it is relatively easy to access - you can either fly in, which is the fastest way or take the train (albeit very slow and sometimes not arriving at all). During October and November, the bears congregate near the shoreline of Hudson Bay awaiting the build up of pack ice which will eventually be their ticket to food - seals, sea lions and whatever else comes their way. They will hunt during the winter and build up enough fat reserves to last them through the summer fast - they barely eat anything during the summer and spend the majority of their time conserving energy until the next big hunt, when the cycle starts again.

We headed out on the gravel roads again in search of polar bears, scanning the brown tundra (still no snow) for these great white creatures. Soon we caught sight of a cute young polar bear (around 2-3 years old) sitting right on the side of the road. He was pretty relaxed and didn't seem to mind that our truck was only 100 then 50 metres away. I thought he was pretty big but then I didn't have anything to compare him to and later I was to find out that they come in even bigger sizes! We watched this bear for quite some time - he would dig around the base of some scrub bushes then crouch down and lick his paws. There was definitely something in this bush that he really liked. Eventually he moved slowly away from the road and curled up to sleep beside a small pond. When they sleep they almost blend in to their surroundings - there are white coloured rocks in the tundra which makes for a few false alarms when trying to spot the bears to begin with.

We continued slowly along the road looking out for more polar bears and saw another foraging in the distance. Since he was so far away we continued driving the circuit then got back out on the main road and headed for the research centre further up the road. Beyond the research centre the road becomes rough and is only passable during summer in a regular vehicle, so we took the opportunity, before the arrival of snow, to drive to Twin Lakes 15 kms farther on. 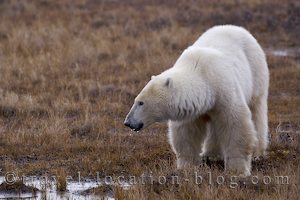 The road wends through boreal forest which we hoped was occupied by polar bears. We found our way to a view point which overlooks a lake and the forest which stretches out for miles to the south, but no luck with seeing any bears here! We cruised back to the research centre, checking out a few side roads as we went but then decided to return to the site of where the other bear was to see if there was anything new. Our first bear was still exactly where we left him.

Taking another side road we caught sight of another young bear! He was the one we'd seen from a distance and he'd made his way over to a rocky plateau then curled up in the rocks to sleep. He continued to sleep while we watched then after about 30 minutes he sat up and slowly started moving about. When he came to investigate our truck we decided to move back a little so as not to encourage him and he moved away further.

The unfortunate thing was, he moved closer to the other road and some tourists who'd rented a car, decided it was cute that the bear was right beside them and standing on its hind legs to look in at them. The next crazy act started with them driving off but slowly enough so that the bear would follow and when it'd stop following they'd reverse up so that it would start it again! This is not good training for the bear and was sad to see.

The already dim light was dimming faster as the day came to a close so we left the bears in peace and headed back to town via the back roads getting in before it got too dark. It was snowing lightly by then so hopefully tomorrow we would wake up to a winter wonderland!!

These travel blog entries related to Self Driven Polar Bear Tour From Churchill Manitoba may interest you too:


The scientific name for the picture Self Driven Polar Bear Tour From Churchill Manitoba is:
Ursus maritimus