A little break from the norm, we attend a Genesis concert at the Olympic Stadium in Montreal, Canada. 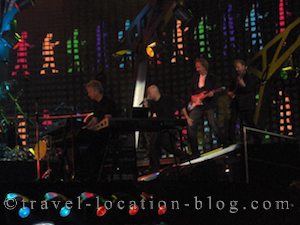 Picture of Genesis in Concert at the Olympic Stadium,
Montreal. Picture compliments of the Shorts.

September 14, 2007:
We spent half the day travelling to Montreal from Quebec City yesterday and found a campground situated conveniently close to the city which had, along with the camper facilities, internet.

By now you've guessed (with a little help) what our appointment is today! We decided to book tickets to the 'Turn it on again' Genesis concert in Montreal. They are playing at the Olympic Stadium tonight and we are meeting some friends who've flown in from St John's, Newfoundland to join us (this picture is compliments of our friends - who had great seats!).

We had a few repairs to attend to on the camper in the morning and had planned to met our friends at their hotel in the city, head out for dinner than attend the concert. We wanted to leave the truck at the campground and take public transport so that we wouldn't have to drive anywhere or worry about parking, but as usual things didn't go according to plan and in the end we drove to the hotel where our friends were staying. It was unfortunately peak hour traffic so we were crawling along the highway. We eventually arrived and decided to leave the truck at the hotel carpark since the Metro service ran to the city and stadium from across the road.

We started to relax after a quick bite to eat and some time to calm down and were starting to get excited about the concert ahead. When we arrived at the stadium - the atmosphere was electric and the place was buzzing. For the concert, the stadium held around 44,000 people and as we understand it was almost sold out.

The concert had opened in Canada in Toronto only a couple of days earlier and hadn't received a good review but we were optimistic - after all this is Genesis! They definitely didn't disappoint, it was fantastic!

At the end of the concert the four of us decided that a t-shirt was needed as a souvenir so we struggled through the crowds and somehow managed it. We put on our sacred tees and climbed into a passport photo booth for some crazy pictures before heading into the city for a more substantial meal.

It sure was a great night, and one we won't forget in a very long time!

These travel blog entries related to Genesis Concert Montreal Canada may interest you too: