We take a tour to find the smallest dolphin in the world - the Hector's Dolphin in Akaroa Harbour, New Zealand. 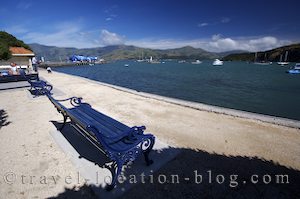 Picture of the waterfront in the town of
Akaroa, Banks Peninsula, Canterbury.

After a peaceful sleep, we started the journey over the hilly landscape of Banks Peninsula. The peninsula itself is made up of ancient volcanic eruptions which formed two craters namely the Akaroa Harbour where we are headed today, and Lyttleton Harbour on the northern edge of the peninsula. Banks Peninsula even started out as small off-shore islands.

We pass by undulating pastures of grazing livestock, and beautiful scenic bays on our way to the quaint town of Akaroa on the shores of the Akaroa Harbour.

The town of Akaroa has a distinct French flair which is as a result of a Captain Langlois who sailed to Akaroa (after purchasing the "peninsula" in a dubious land deal with the local Maori tribe much earlier) with French and German families aboard the ship Comte de Paris in order to form a french colony. However, the English had already entered into negotiations and signed the Treaty of Waitangi before Captain Langlois had returned with the families from Europe.

We checked in for the cruise with Akaroa Harbour Cruises where hopefully we see dolphins and learn about the interesting geology of Banks Peninsula and Akaroa Harbour.

Heading away from the wharf we begin our journey which will take us to the entrance of the 17 km long harbour. We didn't have to wait long for the first sightings of the smallest dolphins in the world - the Hector's Dolphins which are found only in New Zealand.

These happy, frisky creatures enjoyed darting from one side of the catamaran to the other even when we're at a stand still - and boy they move fast. The Hector's dolphins have a distinguishing rounded or crescent shaped dorsil fin which sets them apart from other dolphins. It is possible to swim with the Hector's Dolphins however in the interests of protecting the species, the operators do not approach them but rather allow the dolphins to decide if they want to interact or not.

After spending about 30 minutes with the dolphins (we were lucky that they wanted to visit with us), we left the lively pod to check out the interesting geological formations and other wildlife. We made our way out to the Akaroa Harbour heads which are an example of a typical volcanic sea wall.

Soon it is time to head back to the wharf and after leaving the vessel we head to one of the local bakeries to sample some of the exquisite delights typical of a french bakery.

And now we are at the end of this leg of our journey. We head back to the city of Christchurch to return the camper to the rightful owners and collect a rental car. From Christchurch we make a beeline for Oamaru where we will base ourselves for several weeks.

Stay tuned for more blog entries - we will make a few day trips from Oamaru while stationed there.

These travel blog entries related to Hectors Dolphins In The Akaroa Harbour Banks Peninsula may interest you too: